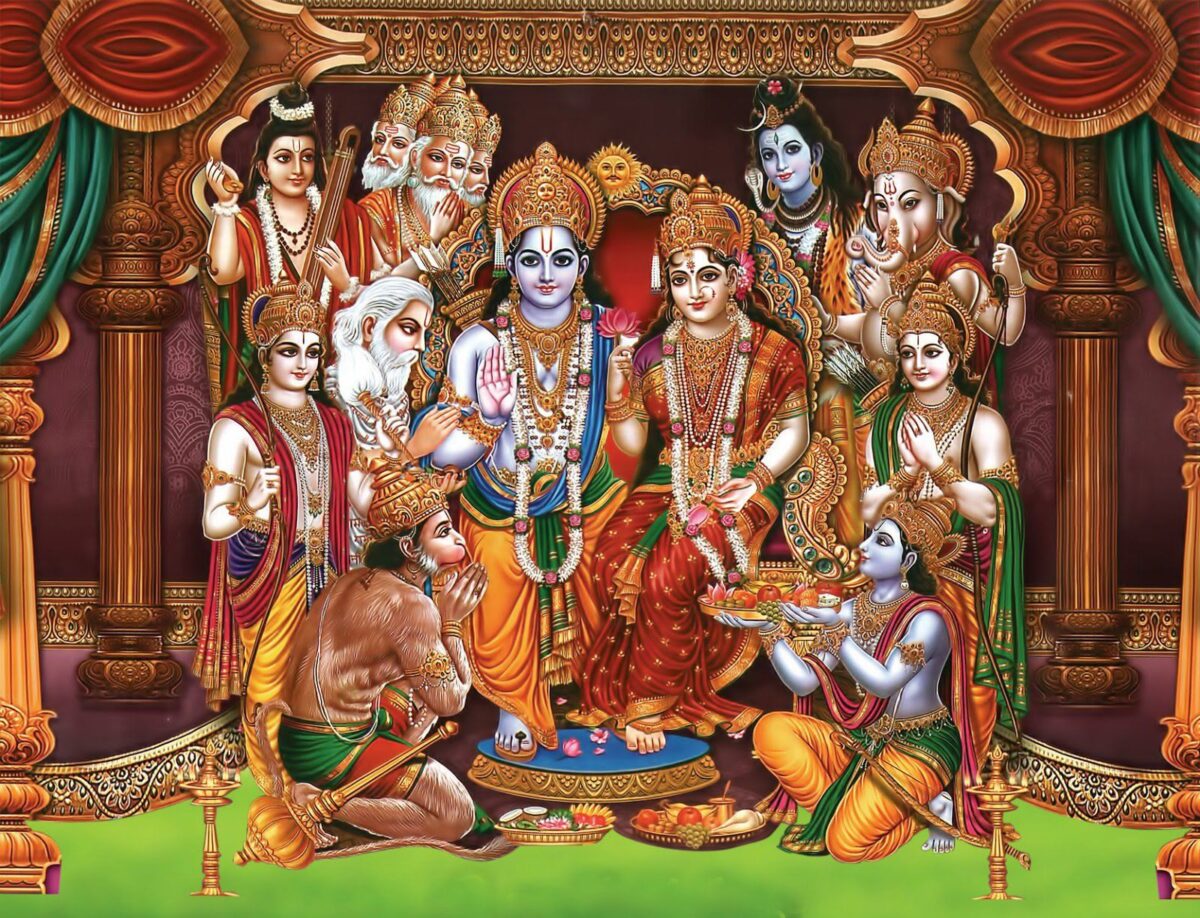 March 30, 2023
7:00 am
Mandir
Shirdi celebrates three festivals with a lot of excitement and Ram Navami is one of them (the other two being Guru Poornima in July and Vijaya Dashami in September). There is an interesting story behind Ram Navami celebrations in Shirdi. In the year 1897, Gopalrao Gund who had been childless for many years was finally blessed with a child after several prayers. An ardent devotee of Baba, Gopalrao wished to thank him and get his blessings for the newborn. He took Baba’s permission to hold a thanksgiving festival in the form of a fair. Baba granted him permission but chose the day that coincided with Urus, a Muslim festival to honor a saint (usually one who had passed away). This was very smart on Baba’s part as it was his strategy to get the two communities together on one day. The two communities carried on the fair and celebrations on the same day for several years. Later, around the year 1912, it was pointed out that it is also the day of Rama’s birth and means a big deal to Hindus. And thus, Baba’s fair coincided with Ram Navami celebrations and has continued since then in Shirdi. It is amazing how for so many years, the Hindus and Mohammedans have celebrated together on this day without any quarrels setting a great example for everyone to follow. As part of a historic annual ritual, the flags placed at Dwarkamai are changed on the day of Ram Navmi. Also, the sack of wheat placed here is replaced with a new one and the old one is used at the prasadalaya. Prayers are offered and some religious activities are organized. The whole affair goes on for three days. The highlight remains the palki procession that goes around the village on the first day. A procession with Baba’s picture and his biography Sai Satcharitra is also carried out. On the second day, which is the day of Lord Rama’s birth, water from the Godavari river is fetched for Baba’s holy bath which is followed by a chariot procession around the village. Devotional programmes are held for the entire night which continue till the final day when the celebrations end with prayers.
Sri Ram Navami..... Read More July 3, 2023
7:00 am
Mandir
Significance of Guru Purnima Guru Purnima (“Purnima means full-moon”) is the one during which disciples and devotees honour and felicitate their Guru and seek his or her special blessings. It is of great importance in Shirdi, perhaps because it is the only festival which Baba asked us to celebrate. Hindu Puranas say that this ritual respecting or worshiping ‘Guru’ on this day started at the time of ‘Vyas’, the author of Mahabharat. Baba asserted the significance of this day indirectly. Once, in 1908, Tatyasaheb Noolkar came to Shirdi and stayed in Chavadi. One day Baba told Madhavrao to tell him to worship that post (pillar). The post Baba showed was near the Dhuni and Baba used to lean on it. That was the day when he was glad to have chance to worship at least the post in Masjid. Then Madhavrao Deshpande went into the Masjid. Baba told him to worship the same post along with Noolkar. But Madhavrao refused and instead requested to allow him to worship Baba himself. At last Baba gave the permission. Dadasaheb Kelkar was unaware of this Puja. Tatya Kote Patil was called from the farm. People gathered the ‘Puja’ material. Dhoti was brought and people put on Dhoti to Baba, and worshiped him. Baba had no use of clothes but he gave permission in order to start the routine of Vyas puja. Thus this Puja was started at Baba’s time and now has taken form of Festival lasting for three days. Click here for details of Guru Poornima 2022 celebrations
Guru Purnima..... Read More 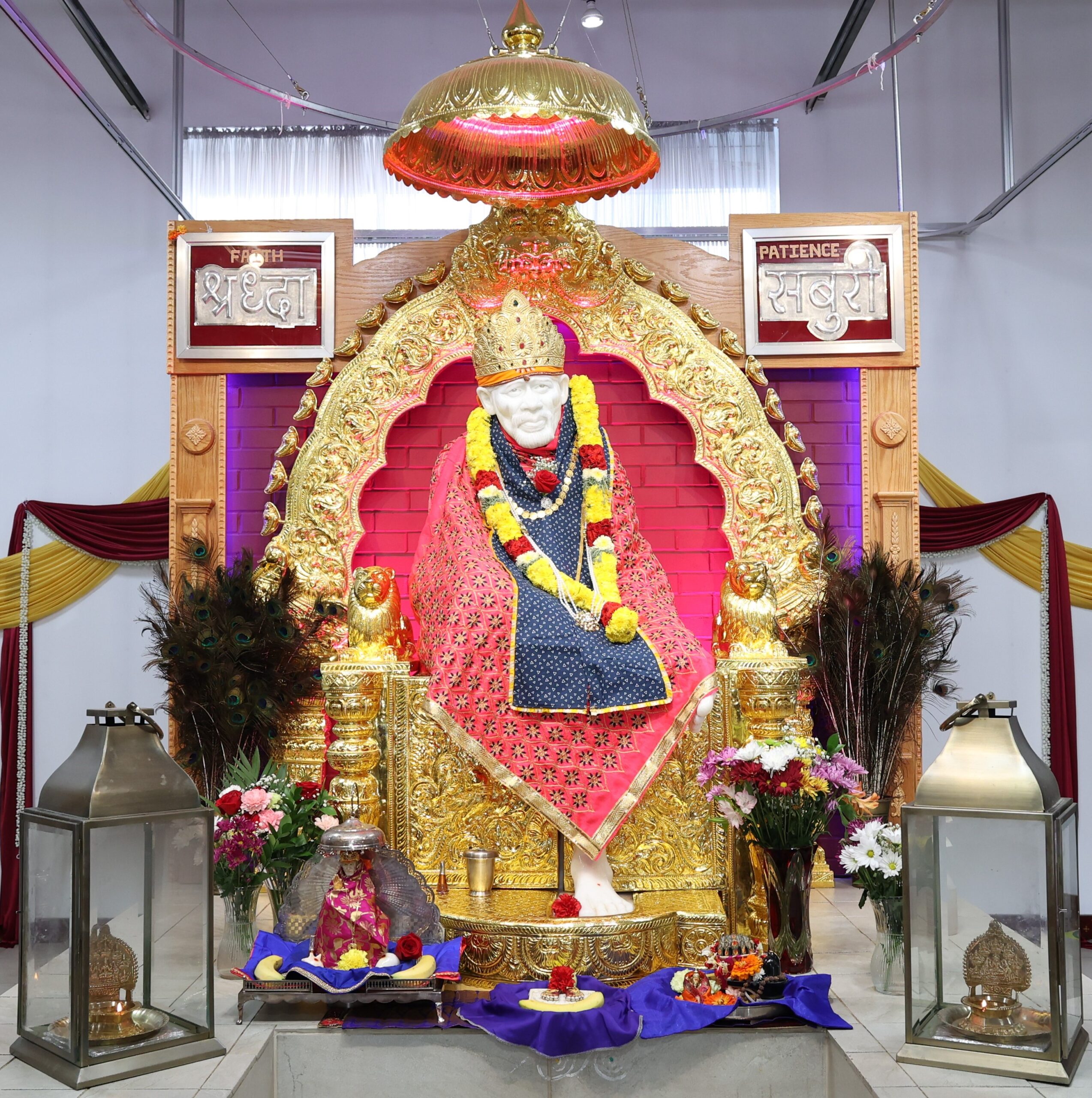 The Shirdi Sai Mandir, the Shirdi of North America, is conveniently located at 2721 Markham Road in Toronto, ON just north of Finch Road and Markham Road.

Baba’s Mandir is spread across 4 units (6,7, 8 and 9) with a total area of approximately 8,000 square feet. The entrance to the Mandir is from Unit 6 which leads into the reception area with facilities to place footwear and jackets. Rest rooms have been provided by the reception area.

After walking across unit 7, further into the reception area, devotees enter unit 8, which is the main darshan and meditation hall. Baba’s beautiful marble murthy, facing west, is located in the East end. Baba’s benign look and mystical smile welcomes everybody to His Dwarkamai in Toronto. This is one of the very few Mandir’s wherein devotees can touch Baba’s murthy to seek blessings and energy. Devotees are requested to ensure that ornaments such as rings and bangles do not scratch Baba.

Devotees may offer parikrama to Baba around the altar. We request devotees to refrain from conducting parikrama during Aarti and pujas. Parikrama may not be possible on busy days such as Thursdays and major events. Please follow guidelines provided by employees and volunteers.

Unit 9, on Baba’s left, houses a stage for Bhajan singers. A seating area is available in Unit 7 for seniors. The Prasadalay, (food distribution) is located in Unit 6 and can seat upto 150 devotees. A small kitchen is located in the west corner of unit 6.

The resource centre is located in Unit 7 wherein various articles such as Satcharita (in various languages), CDs, books can be acquired by devotees for nominal donations.

Devotees using Wheeltrans / wheelchairs may enter the Mandir using the entrance of unit 9.

The Shirdi Sai Mandir, the Shirdi of North America, is conveniently located at 2721 Markham Road in Toronto, ON just north of Finch Road and Markham Road. Baba’s Mandir is spread across 4 units (6,7, 8 and 9) with a total area of approximately 8,000 square feet.